The forensic acquisition produced a 15 GB raw image. When I opened the file, all I got was just a list of partitions. None of my tools were able to recognize and parse the file system of each partition. What caught my attention was the size of the last partition (14.7 GB) and the exFAT signature.

Luckily for me, X-Ways Forensics (XWF) is a very flexible tool. My analysis wouldn't have been possible without XWF and the precious help provided by its creator Stefan Fleischmann who improved a lot the parsing of exFAT volumes.

To correctly parse the image with XWF:

The file system is not encrypted. That allowed me to run data carving to recover deleted files, especially pictures and videos.

What follows is a gathering of the main artifacts that I managed to manually extract and parse. Bear in mind that my assumptions could be imprecise or incorrect.

I ran strings against both of the files. I haven't found any timestamp inside the pim.vol file.

In hex view the body of each text message is preceded by the string "IPM.SMS" or "IPM.SMStext". From what I've seen, the timestamp is not nearby the message and I don't know where it could be located. It's possible to distinguish sent messages from received messages by the fact that a sent message lacks the phone number of the recipient in its structure.


According to what I read in the XDA-Developers forum and on Forensic Focus, Windows Phone periodically creates a XML backup of text messages and stores them in a file named CommsBackup.xml (\Application Data\Microsoft\Outlook\BackupVols). The xml file contains many tags, the most important are:

You can manually edit that file with notepad. Just copy and paste at the end of the file:
WP SMS backup sms <Property Name="0x1a001f">IPM.SMStext 0 SMS:ReplaceOption"> 100/6000

Once finished carving, export all these files to a folder. Use my script wp78_sms_xml.py to automate the parsing of all these carved messages.

Images
Pictures are stored in: \My Documents\Zune\Content\0300\00
The file names are numeric (in hex format) and are in the order in which the pictures were saved on the phone. Even though the phone is running Window Phone 7.8, EXIF metadata shows Windows Phone 7.5. Data carving allowed me to fully recover many deleted pictures.


Bluetooth
The list of received files via bluetooth is stored in:
\Applications\Data\51F49C63-5966-4752-BB12-430455F911A8\Data\IsolatedStore\btsharing.sdf
I used the freeware utility CompactView to open this file and read the table ReceivedFiles.

Emails
Emails are stored in .dat files under:
\Application Data\Microsoft\Outlook\Stores\DeviceStore\data

In the following picture I show the content of an incoming email that I'd sent to myself from another device during the testing. The email is stored inside a dat file. Its partial header is located inside the store.vol file. I don't know yet how to automate the correlation of these two blocks of information. 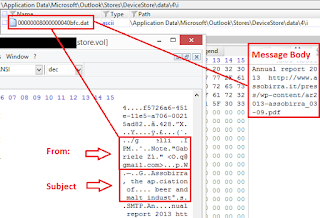 I extracted the entire guest folder and parsed it with full success with Internet Evidence Finder v6.6.

Applications
The two paths \Applications\Data and \Applications\Install contain the same number of subfolders with the same ID names. The data folder contains app settings and user data while install is the installation folder.

In order to retrieve the name corresponding to each ID use the URL:
http://windowsphone.com/s?appid=ID (where ID is the ID you want to search)

Some apps are preinstalled and their IDs are listed here:
https://msdn.microsoft.com/en-us/library/dn602089.aspx

I wrote a small python script wp_appid.py that automatically retrieves AppNames from AppIDs.

The app version information is sometimes stored in files named __ApplicationSettings in  \Applications\Data\[App-ID]\Data\IsolatedStore. For instance this one is from the Twitter app:

Creation time will correspond to the first connection to that SSID. 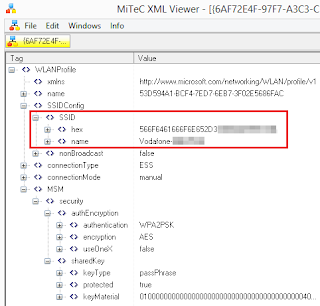 Each entry shows as well when the PDF file was opened.


This file contains the filetime timestamp of when WhatsApp was activated. You can convert it from here: http://www.silisoftware.com/tools/date.php

Pictures and video shared (received and sent) are stored in:
\Applications\Data\218A0EBB-1585-4C7E-A9EC-054CF4569A79\Data\IsolatedStore\Shared\Transfers\

Received pictures when viewed get automatically saved in:
\My Documents\Zune\Content\0300\00

Under this folder there are files in JSON format with a prefix name ItemViewModel containing metadata of files stored on the user's OneDrive account. These files contain useful pieces of information that inform us if a OneDrive account is in use: DiskQuotaUsage, DisplayQuotaRemaining and DateModifiedOnClient.

In case SyncUpload is active on the phone, we'll also see additional details for uploaded files such as: filename, extension, displaysize, lastaccess, modifieddate, ownername and sharinglevel.


Timestamps are in DateTime format. In the following article, Microsoft explains how DateTime works:

Time values are measured in 100-nanosecond units called ticks, and a particular date is the number of ticks since 12:00 midnight, January 1, 0001 A.D. (C.E.) in the GregorianCalendar calendar.

An old post in the xda-developers forum explains how to convert hv files into text files by using a command line tool named rgucomp. The result is not that good, but it's better than nothing. From the command prompt type:
I'll list below some artifacts that can be extracted from the two hives. We can use them as keywords to perform searches in the unallocated space.

Internet Explorer - Typed URLs (user.hv)
URLs typed by the user are located in:

IMSI (system.hv)
FriendlyName (device name set by the owner of the phone)
SimImsi (current IMSI)
LastSimImsi (previous IMSI - useful in case we need to know if another SIM card was used)

I wrote three Python scripts to automate the parsing of all the above artifacts. Some pieces of code are taken from the script wp8-callhistory.py written by cheeky4n6monkey.

My following scripts need Python 2.7 and have been tested on Microsoft Windows only:
[UPDATE 03/27/2016]: text message timestamp has been found and decoded

You can download the scripts from my Github repository.

The following articles have been very helpful to me to understand the structure and location of the data stored on Windows Phone devices:

Posted by Gabriele Zambelli at 11:38 3 comments:

This is a personal blog. The views expressed in this blog are those of the author. I'm not responsible for any errors or omissions. Use any information at your own risk. Just because this is a freely available blog, doesn't mean you can grab content and take credit for someone else's work.